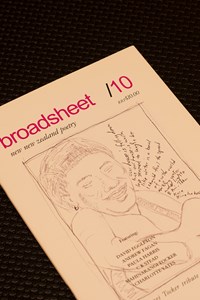 This song exists only in my head: a memory of Mahinārangi Tocker

We stood side-by-side in the kitchen, dealing to the accumulated dishes of the day. I can’t remember why Mahinārangi was in town but, whatever the reason, she was staying with my flatmate, Andrew, and me.

Getting to the kitchen had been a progression. After dinner we had first lingered at the table, then moved outside to the front steps to watch the stars; after the kitchen we would end up sitting on the couch for a few hours. We talked about writing and depression and love and home and illness and all the simple complexities of life.

I was immersed in dealing to the dirty dinner plates when Mahina started playing the Rose’s Lime Marmalade jar. She turned it over and over and played the surfaces in different ways, mixed in with the clunk and slosh of the plates under my hands. Then, her tea towel cast aside, she began singing.

I won’t say that Mahina was singing to me. My presence was probably unnecessary. But she sang and played – the song was Greg’s Hat – two or three or four times in a row. Her voice was beautiful – scraps of the song are still scratched into my memory today. When she was finished, she looked at the jar and told me that she’d written the words a while ago, but hadn’t known what the melody was like, until she laid hands on that empty Rose’s Lime Marmalade jar. Throughout the rest of the evening she kept the jar with her and would play with its tones while we talked.

When she was getting ready to leave, car packed and ready to go, Mahina stood in front of us and asked, with deep seriousness, if we would possibly consider gifting her Andrew’s precious taonga. And from behind her she produced the empty Rose’s Lime Marmalade jar.

The sound of her laugh was better than any sound the jar made.

Andrew gave her this precious musical taonga, after she agreed that it would be fully credited as “Andrew’s Rose’s Lime Marmalade jar” if she used it in recording any songs.

More laughter. The jar was wrapped carefully and put in her bag.

Paula Harris lives in Aotearoa/New Zealand, where she writes and sleeps a lot, because that's what depression makes you do. She won the 2018 Janet B. McCabe Poetry Prize and the 2017 Lilian Ida Smith Award, and was a semi-finalist for the 2020 92Y Discovery Poetry Prize. She was the recipient of a Vermont Studio Center writing residency in 2018.

She is extremely fond of dark chocolate, shoes and hoarding fabric.